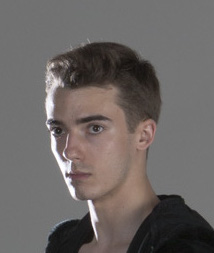 Gonzalo Preciado-Azanza (Zaragoza, 1994). Member of the Latvian National Ballet since 2015, making history by being the first Spanish dancer to be part of this institution. He graduated in Dance from the Middlesex University (London) in 2018, holds a Master’s Degree in Cultural Management at the Universitat Oberta de Catalunya-University of Girona and currently, he is pursuing a Master’s Degree in Advanced Studies in Art History at the University of Zaragoza. He trained artistically at Conservatorio Municipal Profesional de Danza, the Estudio de Danza de María de Ávila and in 2014, finished his studies at the prestigious English National Ballet School, after receiving the Dance and Drama Award from the Government of the United Kingdom. Moreover, he also participated at the Bartholin International Ballet Seminar in Copenhagen and in 2012, he received the Beca de Ampliación de Estudios Artísticos by the Diputación de Zaragoza. His repertoire as a dancer includes more than 25 Solo roles, including the Caliph of Baghdad in Scheherazade and her Tales and more recently Karlens in Antonija #Silmaci. He has danced all the classical ballets as well as neoclassical and contemporary pieces by world renowned choreographers. Previously, he participated in productions with other companies including Ballet of Zaragoza, LaMov Cia de Danza and the English National Ballet. He has done more than 500 performances internationally in Germany, Italy, Spain, Latvia, Estonia, Lithuania or the United Kingdom. His repertoire as a choreographer includes more than 10 creations, including So far, yet so close (2017) and The Essence of Time (2018), both commissioned by the Spanish Embassy in Latvia. At the same time, he has developed his own Solo Tours, including Phoenix Tour 2018 and he has also organized the Photo Exhibition De Zaragoza al Mundo, alongside the photographerAlberto Rodrigálvarez. He is an associate artist at the DancingStrong Movement Lab, besides he has conducted archival research in numerous institutions in Hannover, Madrid, Barcelona and more extensively in Riga. His results have been presented in international journals and congresses in Greece, United Kingdom, Latvia, Spain and United States. Since 2020 he is a critic and writer of the prestigious international magazine Dance Europe. He is also a regular contributor of the magazine Danza en Escena in Spain, as well as the founder, editor and writer of the divulgation blog Parallel Worlds: and Sciences since 2011. He is a member of One Dance UK and the UNESCO International Dance Council. In addition, in 2017 he was included in the Global Dance Directory CID UNESCO and in 2018 in the Latvian Encyclopedia of Dance and Ballet.